SHORT VERSION: The Chemex coffee maker is a work of art that also makes an incredible cup of coffee. If you’re new to the pour over method of coffee making, don’t worry! It’s easy, and it’s very rewarding. Not only will you have great coffee without all the pitfalls that plague automatic drip coffee makers, you’ll also have a really cool conversation piece in your kitchen.

If you’ve been “into” coffee for a while, or if you hang out with coffee geeks, chances are you’ve heard the Chemex name tossed around. The reason this coffee maker is so well known is that pretty much everybody who has ever used one is completely in love with it. The Chemex coffee maker was invented in 1941 and has remained unchanged since. It’s so famous that it’s even earned a place in the Smithsonian! That’s an honor unlikely to ever be earned by Mr. Coffee or Hamilton Beach. Chemex is so well regarded that it even makes frequent appearances in Hollywood and pop culture. Everyone from James Bond to Mary Tyler Moore (RIP) to Joey from Friends has gotten their fictional hands on a Chemex. It’s that old and remains that popular. 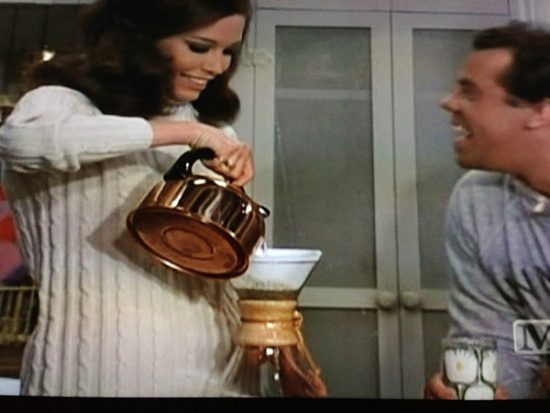 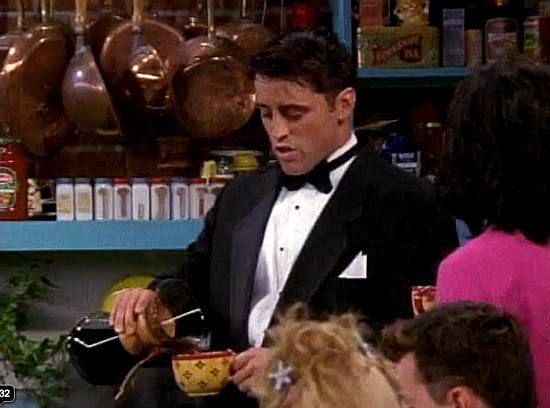 If you’re really, truly in pursuit of The Perfect Cup of Coffee, you have to at least try the pour over method. It gives you the kind of control over the brewing process that machines can’t. The pour over method can be done with something as simple as a cone-shaped piece of metal (I reviewed a good one a while back), but the Chemex is legendary for two main reasons. First, it’s pretty. I mean, just look at it! It’s a thing of beauty, especially with that wooden collar and leather thing tied around the middle. Second, and this is very important, the Chemex coffee maker uses a special type of coffee filter. The Chemex coffee filter is a special kind of filter manufactured only by Chemex that is thicker than regular filters and filters out coffee oils and such. The result is a coffee that is different from anything you’ll get with ordinary paper filters or a permanent gold tone filter. 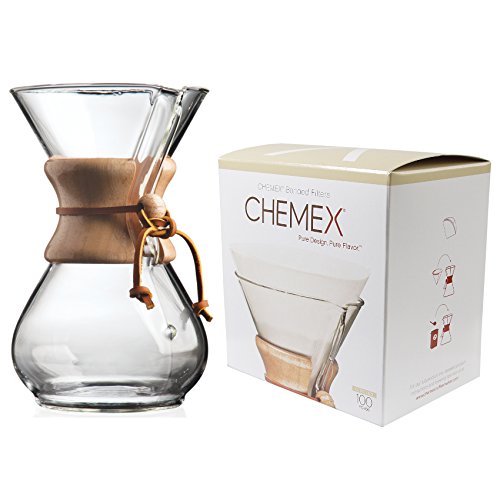 Making coffee with a Chemex coffee maker is also a way to fully appreciate the coffee making process. If you’ve never seen coffee bloom before, you’re missing out on something special. Coffee blooms when it comes in contact with hot water. Rather than get all scientific about what exactly is happening to the coffee grounds, suffice it to say that it’s magic. You need to do the pour over method to watch coffee blooming, and there’s really no better way to do it than with a Chemex.

Oh, and guess what? Coffee isn’t the only thing you can use it for. If you’re having guests over for dinner, your Chemex can also double as a fancy water pitcher or maybe even an unusual wine decanter.

So if the Chemex coffee maker is so great, why would you NOT buy one? Well, let’s just put it bluntly: the pour over method of coffeeing is not for the lazy. It’s not for grab-n-go coffee drinkers. It’s not for people who get their coffee exclusively at Starbucks. It’s for coffee drinkers who have some appreciation for the craft of brewing coffee and are willing to take a tiny bit of extra time to do it right.

This is not to say that you have to be some unbearable coffee snob in order to enjoy a Chemex. To the contrary, tons of regular folks just like you are Chemex lovers. You don’t have to use the Chemex for every cup of coffee you ever brew at home, and many Chemex owners do have automatic drip coffee makers as well. In fact, some people have even found ways to use their Chemex with certain coffee makers as a sort of best-of-both-worlds compromise.

Below: Using a Chemex with a Bonavita BV1800.

George Michael (RIP) once sang, “if you’re gonna do it, do it right.” He wasn’t singing about coffee, but the sentiment can be applied here. The pour over method is a wonderful way to make coffee, and the Chemex is the perfect vessel to do it in. And let’s not forget…once you get past the elegance of the form and the experience of watching your coffee bloom, you’re also going to be tasting coffee that just might be the best you’ve ever had.

In the image below: the coffee bloom. You can do this with a Chemex.

BUY IT and discover why so many are Chemex converts