The Breville Precision Brewer TRIES to do it all … but does it?

SHORT VERSION: The Breville Precision Brewer is packed with features. There is a separate pour over kit you can buy if you’re too lazy to do pour over the manual way, and there are settings and brew modes galore! In addition to a flat-bottomed filter basket for 12 cup brewing, this coffee maker even comes with a cone filter basket for brewing single cups. The SCA certification is great, and customers say it makes great coffee, so that’s the good news. The bad news is that this coffee maker is just really complicated, it’s loud, and it appears that there’s lots that can go wrong with it. That’s actually true of most coffee makers, but the Breville Precision Brewer really ratchets up the complexity of morning coffee with LCD menus and swappable parts. It’s Breville, so I think this coffee maker is worth the gamble. But stay away if you like to keep things simple.

The SCA, formerly the SCAA (why?), has added the Breville Precision Brewer to their lineup of Certified Home Brewers. Breville is a premium name that has a reputation for producing expensive, high quality home appliances.

The Breville Precision Brewer definitely fits at least part of that mold. Just by looking at it, it’s pretty easy to see that this machine has a high gloss factor. Stainless steel everywhere, a slick little LCD screen, and just generally solid construction all around. This is more or less what Breville is known for. Hence, it’s not too surprising that one of their few drip coffee makers has earned SCA certification.

At 16 inches tall, you’ll probably want to measure your cabinets before buying. With that said, let’s dive in and find out whats good and not-so-good! 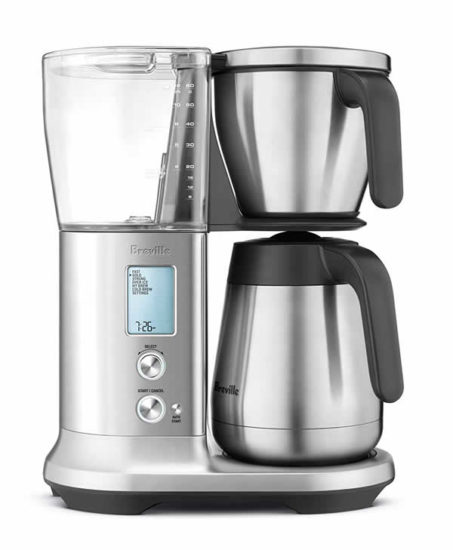 The Breville Precision Brewer is packed with features, several of which are nearly impossible to find in other drip coffee makers. It sports a PID temperature control unit which is fancyspeak for a sophisticated and precise onboard computer that monitors and adjusts water temperature. It offers adjustable water flow rate and blooming time, hence giving you control over water contact time.

And here’s an unusual feature: This coffee maker comes with both flat-bottom and cone filter baskets! Weird. Apparently this is because Breville recommends the cone filter basket when using its single-cup feature or brewing up to 8 cups of coffee. If you’re going to brew 12 cups, you need to use the flat-bottom “cupcake” style mesh filter basket (paper filter optional).

And of course there are multiple brew settings, “Gold” being the recommendation. Other settings available are Fast, Strong, Iced, Cold Brew, and My Brew. My Brew is your own customized brew setting.

If you’re intrigued by the Cold Brew setting, here’s a suggestion: Just make cold brew like a normal person! It’s easy. You don’t need a big, fancy coffee maker to make cold brew for you. In fact, I wrote a whole thing about how to make cold brew coffee. Don’t buy this Breville for that function alone.

So those are the major features. Oh yeah, and it’s also programmable! That fancy LCD screen is there for a reason.

The Breville Precision Brewer is available in two different models: glass carafe and thermal carafe. As of this writing, the glass carafe model has only six total reviews, five of which are 4 and 5 star ratings. The more popular thermal carafe model has racked up 43 Amazon reviews, 30 of which are 4 and 5 star ratings. That totals up to 35 out of 49 reviewers who think this coffee maker is awesome, or about 71%. Not bad.

Naturally, the people who love this coffee maker say it makes great coffee. “Perfect” is a word that’s been thrown around by a bunch of reviewers on Amazon. Buyers are also mostly impressed with the thermal carafe and how well it holds heat. A customer by the name of “slider1578” claims the following:

I’ve made coffee at 8AM and dumped it at 8 PM to only discover the coffee was still warm and drinkable.

slider1578 didn’t drink that 12-hour-old coffee, but I suppose the point is that the thermal carafe performs admirably, and it’s also drip-free.

Also, it’s worth noting that there are no complaints of plastic taste (yet). This coffee maker does have a plastic water reservoir, so if you’ve had problems in the past with plastic taste, this may not be the coffee maker you want. This is.

Every coffee maker, no matter how fancy and expensive, is going to have its detractors, and Breville is not immune to this fact of life. Far from it, in fact. We already know that 71% of Amazon reviewers think this coffee maker is the bee’s knees. The flip side of that coin is that 29%, or nearly 1 in 3, are less than impressed.

One of the major complaints is that the Breville Precision Brewer is LOUD. Amazon reviewer Clan Lindsey, who got his Breville for free in exchange for his review, says that this coffee maker “sounded like a bulldozer roaming around (his) kitchen.” Clan may have a bit of a flair for the dramatic, but he (or she?) isn’t the only one who has commented on how much noise this coffee maker produces.

Some others have complained that the coffee maker doesn’t soak the grounds evenly. There are multiple reports of the coffee grounds forming a “divot” shape in the center of the filter basket, indicating that the grounds on the outside did not get the soaking they deserved. I can’t explain this mystery with great certainty, but could it be possible that maybe those people forgot to tell the coffee maker that the flat-bottom cupcake-style basket was in use? You have to do that when you switch from one filter basket to another.

Some customers have speculated that the people who had problems with uneven soaking may have been using too coarse of a grind. Sure, that could be possible. Or maybe they had the flow setting wrong? Or maybe they forgot that the pour over adapter kit (sold separately here) was installed? Who knows! When a coffee maker has as many parts and settings as this one does, troubleshooting can get messy.

Others have complained of coffee overflowing from the filter basket, which isn’t all that unusual of a complaint. I actually addressed that in this article about common drip coffee maker problems.

And of course, there are a few people who have said that it just malfunctions or stops working after a while. A couple of people have reported error messages. A couple others have reported unreasonably long brew times of 20 minutes or more. At times, the coffee maker won’t brew a full pot.

A couple of people have also complained that, in order to use the “pour over” function, a separate pour over adapter kit is required. To use it, you need to swap out the spray head and also fiddle with the menu screen.

This coffee maker really tries to do it all. Ice coffee, cold brew, pour over, single cup, 12 cups, and lots of customizable settings. If you just want your damn coffee, then the Breville Precision Brewer is definitely NOT for you! This is probably one of the most complicated coffee makers on the market. The price reflects a whole lot of technology and programming that went into it, as well as the Breville name.

To be fair, even the people who don’t like this coffee maker say that, when it works, it makes great coffee. You should expect nothing less from a coffee maker that is SCA certified. The big issue seems to be that there’s just a lot that can go wrong with a machine that’s this complex. My personal opinion is that any coffee maker that needs two different filter baskets is trying to do just a little too much.

Still, it’s hard to ignore the 71% of Amazon customers who say it’s the best coffee maker ever made. My advice to anyone who buys this coffee maker is to save the box and mark your return window on a calendar. Breville’s customer service is reportedly pretty good, and they’ll probably send you a free replacement machine if you have a lot of problems. But you may not want it if this coffee maker is just too gadgety for you.

BUY IT if you have a high tolerance for button pushing and gadgetry.
DON’T BUY IT if you like things to be simple.