Which BUNN Coffee Maker Should You Buy?

It’s no secret that I have a weird crush on BUNN, so I almost feel silly writing this article. But I was just playing around with Google’s autocomplete function, and it turns out people are googling this question:

“Which BUNN coffee maker should I buy?”

Well, funny you should ask!

The short answer is this: Buy the BUNN VP17-1SS. It makes amazing coffee and it’s incredibly durable. This coffee maker is a consumer version of the commercial coffee makers BUNN is so well-known for. Here’s how the VP17-1SS differs from its commercial brethren:

– The VP17-1SS is designed to keep only one carafe warm (as opposed to two or three, which a restaurant might need).

– The VP17-1SS is NOT designed to hook directly into your plumbing. You put water in it just like you would any other drip coffee maker.

Because the BUNN VP17-1SS is, at heart, a commercial coffee maker, it’s built to last and it brews fast, hot coffee. The water reservoir is stainless steel, as is the exterior body. And the path that water takes from the stainless steel reservoir to the shower head is also made entirely of metal, save for a couple of silicone grommets.

Also, as I’ve already mentioned, this coffee maker brews fast. It works just like the Velocity Brew line (discussed below). It keeps water hot at all times, and when you’re ready to brew, it takes about 3 minutes to brew a full pot.

If you don’t like the idea of water being kept hot 24/7, you can unplug the coffee maker and then turn it back on later. Some people even choose to plug it into a timer so that it turns on and off by itself.

If you haven’t already read my other articles where I gush over this coffee maker’s quality and durability, you should! I did a full write-up on the VP17-1SS, and I also wrote quite a bit about why this coffee maker is THE answer to plastic taste problems.

Now, with all that said, there may be one thing holding you back: the price. The BUNN VP17 is not cheap. In fact, the price tag is in the vicinity of the much-ballyhooed, SCA-certified Technivorm Moccamaster.

If you found this page by googling which BUNN coffee maker you should buy, it’s probably fair to assume that you’re already a fan of BUNN. That’s good. Technivorm makes a fine product, but in a which-coffee-maker-will-last-the-longest contest, there’s no question that the VP17 would win by a longshot. That contest doesn’t even sound fair.

Anyway, back to the subject of price … yes, the VP17 will set you back a fair amount. The good news is that BUNN also makes the much-more-affordable Velocity Brew line of coffee makers, and those are also equipped with stainless steel reservoirs.

Wait, have you noticed that I keep on mentioning the reservoir? Before we start looking at BUNN Velocity Brew coffee makers, I feel compelled to explain …

Why You Need a Coffee Maker With a Stainless Steel Reservoir

Most coffee makers are built with a plastic reservoir. While this is great for keeping costs down, it’s not great for the taste of the coffee. “Plastic taste” in coffee is a real thing, and a lot of people have had issues with it.

Pardon me for recycling an image I just used in another recent article, but this collection of real quotes from Mr. Coffee customers really illustrates how pervasive the plastic problem is: 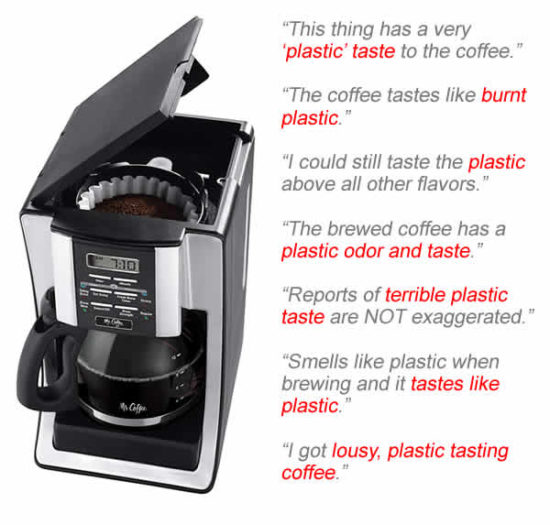 If you’ve been drinking coffee for ages and have never had a problem with plastic taste, then I suppose you can skip this little rant entirely. For those of you who have experienced this disgusting phenomenon, the stainless steel water reservoir is your new best friend.

I have written pretty extensively on the subject of plastic taste. My Plastic Taste Anthology includes 7 ways to get rid of plastic taste, 10 plastic-free coffee makers, the only true stainless steel coffee maker there is (spoiler alert: it’s the BUNN VP17), and I just recently expounded further on this subject in my detailed review of what to look for in a coffee maker.

I confess that I am not a coffee scientist (and yes, I think that’s an actual job). Nor have I conducted any scientific studies to determine why some people taste plastic in coffee and others don’t.

But goshdarnit, when it comes to coffee makers that have stainless steel reservoirs, NOBODY complains about plastic taste.

Now let’s look at some other BUNN coffee makers!

If you’re looking to spend as little as possible, the BUNN coffee maker you should buy is the GRB Velocity Brew (Amazon link). As of today, this coffee maker is the lowest-priced Velocity Brew on Amazon, and I’m quite confident when I say that you will not find a less-expensive drip coffee maker with a stainless steel reservoir.

The BUNN GRB Velocity Brew works in much the same way as the BUNN VP17-1SS described above. It keep water hot at all times so that the machine is always ready to brew.

When you start the brew process, the coffee maker will produce a full pot of nice, hot coffee in about 3 minutes, just like all Velocity Brew models. And if you go on vacation, or if you just want to use less energy, you can turn it off or plug it into a timer like the one below.

But the GRB, as you can see in the video further down below, is pretty much just black plastic all around the exterior. It may look a bit, um, “spartan” to some, but it performs like a champ.

As of this writing, there are 1,552 Amazon reviews of the BUNN GRB Velocity Brew, and 1,208 of those are positive (a very healthy 78%). In fact, the overwhelming majority of those positive reviews give it a full 5 stars.

And, as with all coffee makers, there are those who aren’t crazy about the product. A fairly common complaint among critics is that Velocity Brew coffee makers (in general, not just the GRB) sometimes give off a plastic smell (not taste!) when they are first put into service.

Most people do NOT get the plastic smell, but apparently enough people do that it’s pretty easy to see that trend in the Amazon reviews. According to a BUNN customer service rep, the smell is due to the type of epoxy (a really strong glue) that is used inside the machine.

The plastic smell is temporary and will go away with time. How much time? It varies. Days, weeks, some say a month. It probably depends on when your Velocity Brew rolled off the assembly line.

Other complaints are the same ones that seem to plague all coffee makers: weak coffee, overflowing filter baskets, dissatisfaction with the quality of materials. These complaints form a small minority of the opinions on this coffee maker, but they’re worth thinking about.

And then there are others who complain that their Velocity Brew stays on all the time. Uhh, that’s the way it’s designed! Know what you’re buying, folks.

I have covered some possible causes of problems like weak coffee and overflowing in my article about how to solve common drip coffee maker problems.

This is the same BUNN Velocity Brew that’s pictured up above, next to the BUNN GRB. The big differences? Well, we can already see that this coffee maker just looks nicer with the steel cylinder in the back and an overall less-plasticky feel, although the top portion of the unit looks to be the same.

With the BUNN BT Velocity Brew, you’re also getting a thermal carafe! I explained this in A Beginner’s Guide to Choosing a Great Coffee Maker, but let’s do a short recap of why this is useful.

Some say it tastes “burnt,” others just say it’s nasty. The bottom line is that you’re essentially “cooking” your coffee on a warming plate. Thermal carafes solve that problem by retaining heat that would otherwise escape a glass carafe. Your coffee stays hot without an external heat source.

If you like to enjoy your coffee slowly and don’t want to spring for the VP17, the BUNN coffee maker you should buy is the BUNN BT Velocity Brew (Amazon link).

Out of the hundreds of coffee makers on the market today, only a handful has earned SCA certification, so that’s a pretty big vote of confidence. If you’d like to know more about SCA certified coffee makers, I wrote down my thoughts on 10 of them.

While the HB Heat N Brew may be SCA certified, it is NOT a Velocity Brew. In fact, it’s kind of the opposite!

What I mean by that is that the BUNN HB Heat N Brew is designed to heat up water only when you choose to brew a pot of coffee. Whereas the Velocity Brew models keep water hot at all times, the Heat N Brew has no such option. Therefore, it takes longer to brew.

For some, this is great. Not everyone wants or needs a coffee maker that constantly keeps a tank of hot water at the ready. When it’s time to brew a pot of coffee, the Heat N Brew will heat water up to about 200° F before releasing it into the coffee grounds.

It takes about 10 minutes to brew a full pot, but it’s worth the wait.

Another thing that’s different about this BUNN is that it’s programmable. The VP17 and BUNN’s Velocity Brew coffee makers have no such feature because they brew coffee so fast. The Heat N Brew has programmability built into it because of its longer brew time.

But wait! There’s more! Actually, this last thing isn’t exactly a plus. The Heat N Brew has a plastic water reservoir. This isn’t a bad thing for everyone, but you know how I feel about plastic reservoirs.

If plastic taste has been a problem for you in the past, it’s probably best to stay away from the Heat N Brew. Stick with the VP17 or a Velocity Brew.

However, if you’re fine with the plastic reservoir, you like the SCA certification, and/or you want a BUNN coffee maker that’s programmable, this is it. The BUNN HB Heat N Brew (Amazon link) is the BUNN coffee maker you should buy.

Despite (or perhaps because of) the very different design of this BUNN coffee maker, Amazon feedback is pretty limited. As of this writing, there are only 47 reviews. 38 of those reviews are 4 or 5 star ratings (80% positive), but I’d like to see more feedback on this coffee maker before recommending it with any enthusiasm.

P.S. The video below says this coffee maker is certified by the “SCAA.” That’s the SCA’s old name! They changed it. Also, BUNN used to call this coffee maker the “10-cup programmable coffee maker.” Not very original. That’s why it is now called the Heat N Brew. Because it heats. Then it brews.