They are coffee mugs that react to heat and change their appearance! And let’s be honest—this is practically the only kind of coffee mug that people are actually excited to get as a gift.

Look at the first mug below. When the mug is empty, the Game Boy is “off.” Pour hot coffee into it, and the Game Boy suddenly “turns on”!

Of course, it’s just a picture on a mug. Sorry, there’s no actual Super Mario game to play. Still, any gamer on the planet would LOVE to get this as a gift.

Keep scrolling down to see the rest of the heat changing coffee mugs in this carefully curated collection.

Grownups only: scroll all the way to the bottom for something that’s a bit … shall we say … saucy!

Click (or tap) on any image or product name to view the current price on Amazon. (sorry, prices really do fluctuate from time to time) 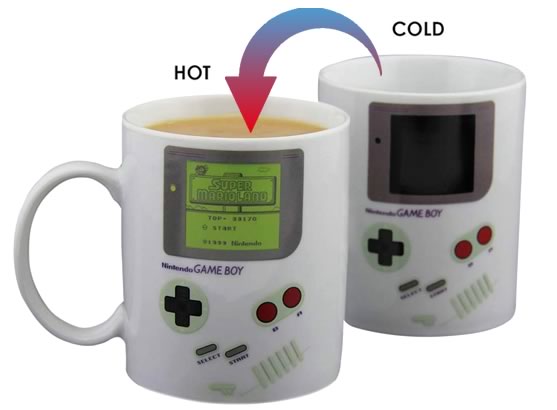 Seriously, give this heat changing coffee mug to a gamer! You’ll be hailed as a hero for all eternity. 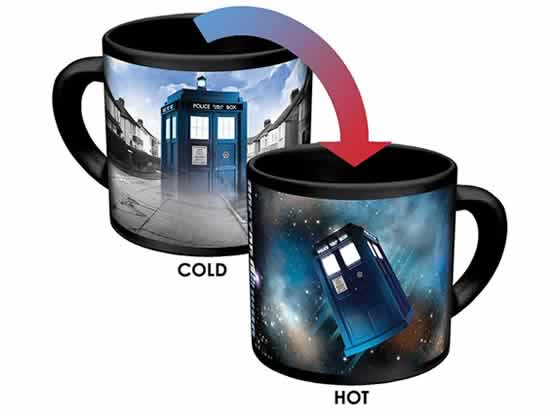 My earliest memory of Doctor Who is from the late 70s or maybe the early 80s. I used to come across the Jon Pertwee incarnation of the show while I was looking for Saturday morning cartoons to watch.

If I had known that I was watching the beginnings of a sci-fi mega-franchise, I probably would have tuned in for longer than 10 seconds at a time! But alas, I was more interested in Thundarr the Barbarian.

Anyway, every Doctor Who fan MUST have this heat changing Doctor Who mug! 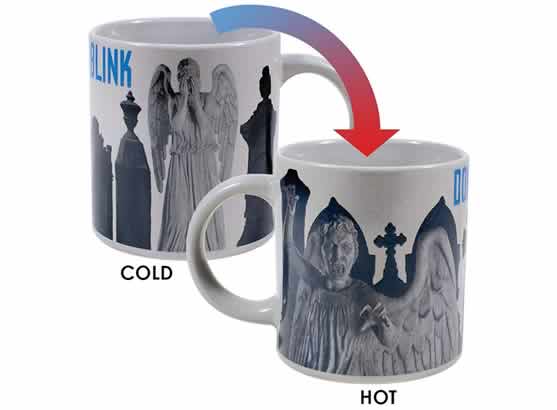 Since Doctor Who has never really caught on with yours truly, I confess that I don’t fully understand this particular Doctor Who mug.

But it’s one of the most-purchased heat changing coffee mugs on Amazon, so I thought it would be a crime to not feature it here. 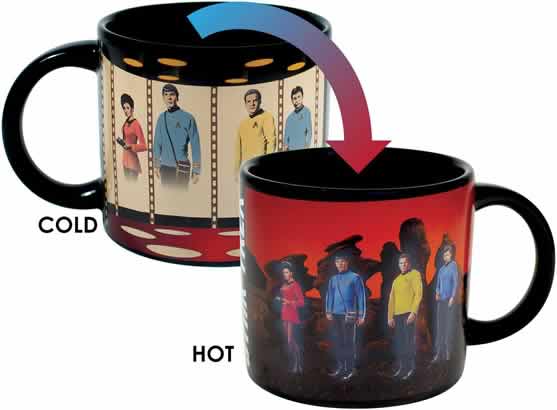 If you’re going to put the crew of the USS Enterprise on a heat changing coffee mug, this is the way to do it.

Dammit Jim … I’m a doctor, not a barista!

InterestPrint “Cat Looking From The Inside” Heat Sensitive Coffee Mug 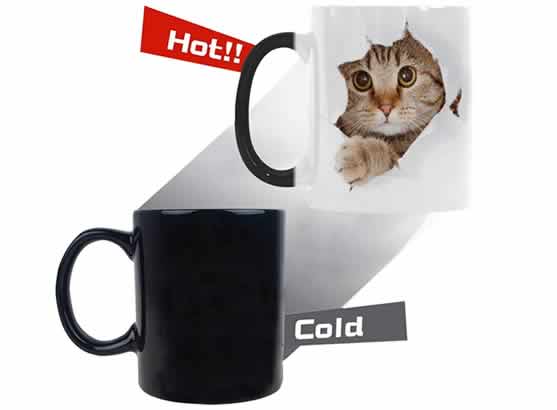 I’m a dog person myself, but I have no objection to cute kitties.

The fact that this heat changing coffee mug starts as plain ol’ black is a real turnoff, but cat people really, really love this mug. I guess I feel some level of responsibility to the crazy cat ladies of the world. 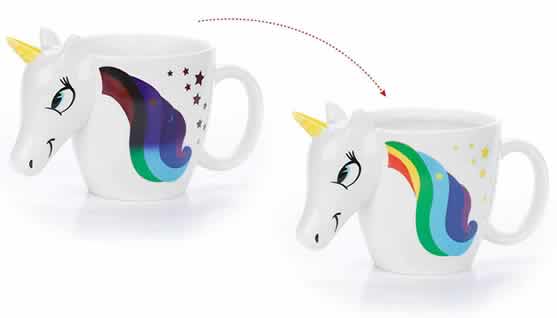 I don’t think I’d want this piece of cuteness in my kitchen, but something tells me this would be a huge hit with kids. And yes, hot cocoa will bring out the unicorn rainbow just like hot coffee would. 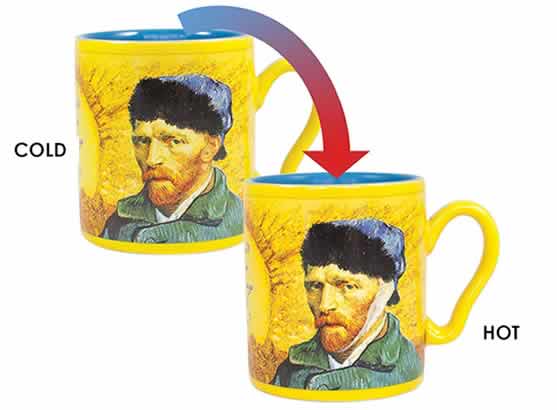 Even if you’re not into art, this is pretty funny. Goodbye, Van Gogh’s ear! It’s time for my coffee now. 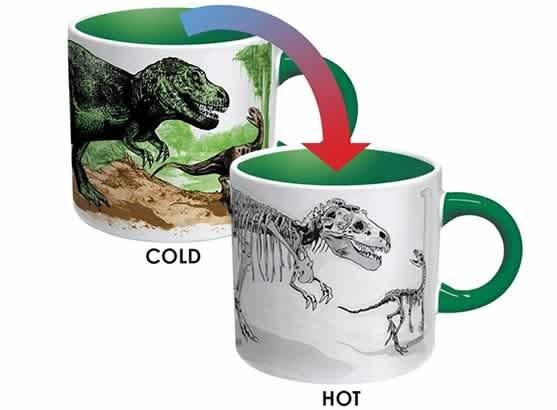 The perfect heat changing coffee mug for the paleontologist in your life! 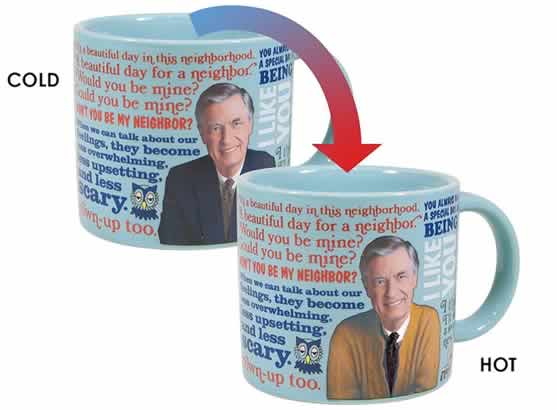 I used to watch Mister Rogers when I was little. Honestly, who didn’t? For some reason, his whole intro song and shoe-changing routine was captivating. But once he changed into his slippers, I usually flipped the channel to whatever cartoon violence I could find. 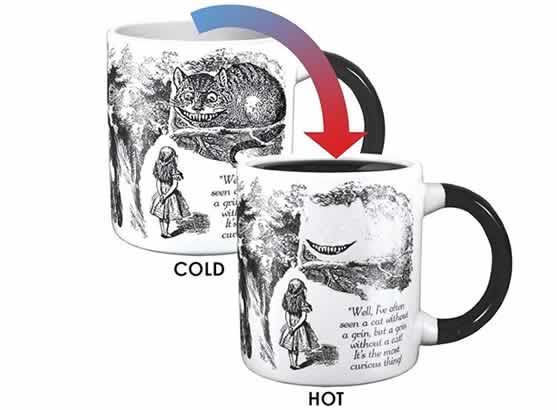 No, Alice, you’re not crazy. There really IS a gigantic talking cat in that tree! Or is there … ? 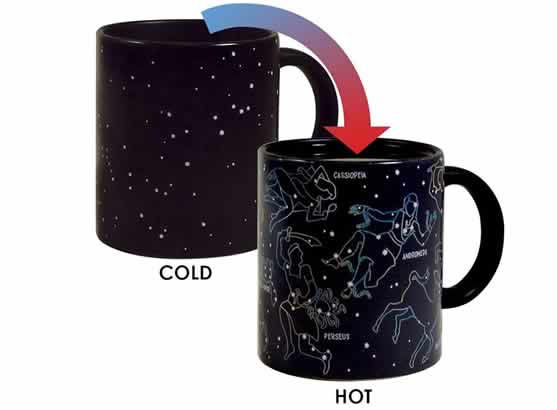 Constellations are great, but don’t ever ask me to look up in the sky and find one that doesn’t have “dipper” in the name.

This is the kind of thing that heat changing coffee mugs were made for. And you get to learn a little something with your coffee while you’re at it. 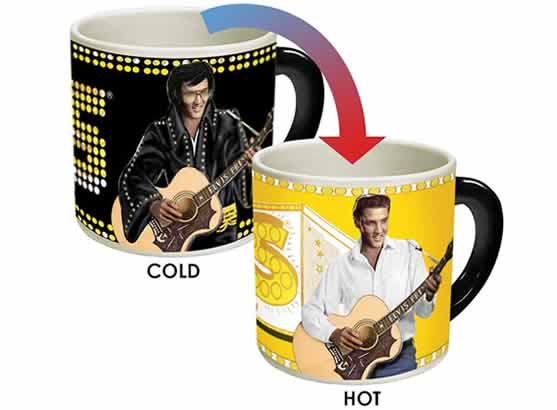 At first I thought the order of Vegas to Memphis should be reversed. Then I realized that Memphis Elvis was the hot Elvis, so it’s only fitting that he appear when the mug is hot. Vegas Elvis was old and kind of creepy.

Nonetheless, this heat changing coffee mug is a nice tribute to The King. 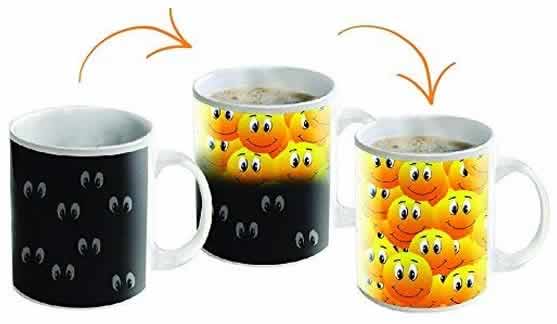 I’m throwing this one in for a change of pace. Smilies. They belong on coffee mugs, what can I say. 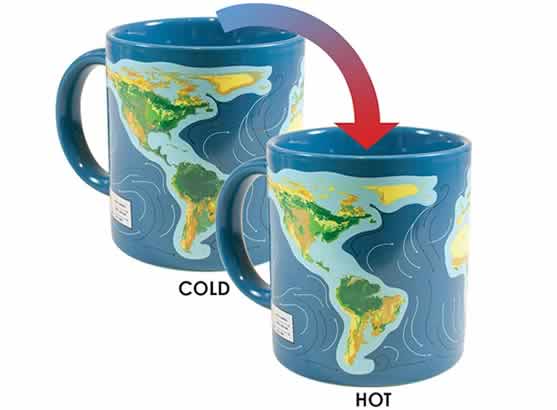 Give this heat changing coffee mug to your Republican Dad to prove, once and for all, that climate change is real!

Goodbye, Central America. It was nice knowing you. 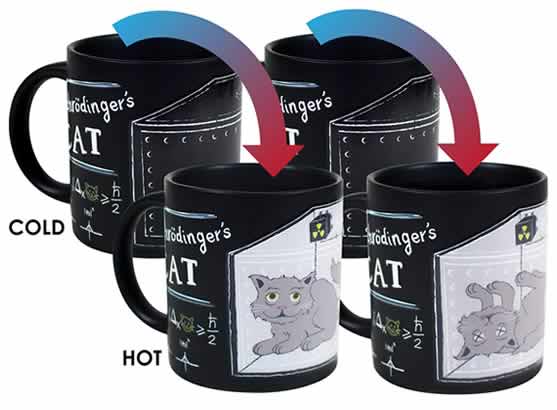 I confess that I had never heard of Schrödinger’s Cat until watching The Big Bang Theory. I’m not so sure this set of heat changing coffee mugs is for cat lovers … unless those cat lovers are also theoretical physicists. 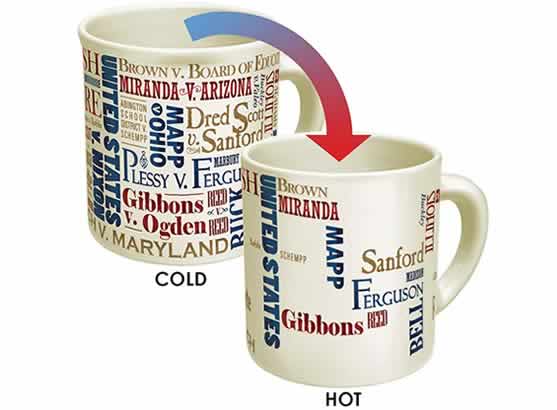 Heat changing coffee mugs can be so educational!

Fill the mug with hot coffee to see the losers of Supreme Court decisions disappear into oblivion, leaving only the winners to share in your morning joe. 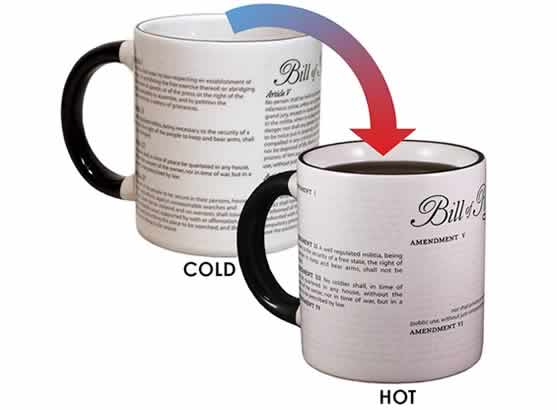 I laughed out loud at this one. Watch your civil liberties disappear! Hey, you weren’t using them anyway, amiright? 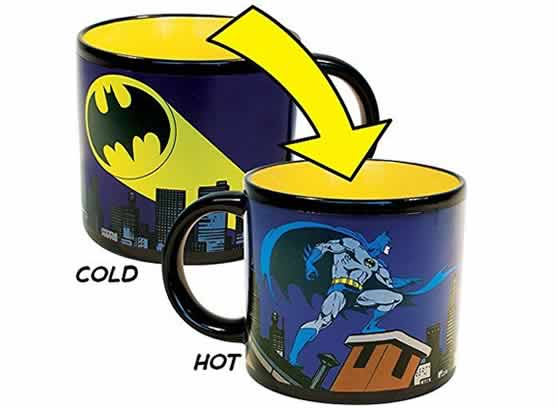 I guess it was inevitable that superheroes would eventually make it into this parade of heat changing coffee mugs.

Heath Ledger totally deserved that Oscar, even if it had to be awarded posthumously. He made the Dark Knight cool again, at least for one movie. 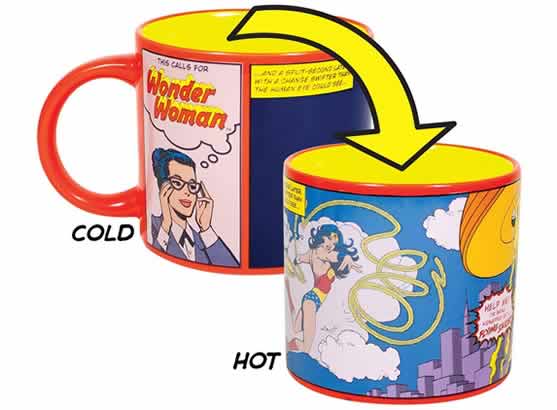 Classic Wonder Woman! I like to imagine that Lynda Carter has an entire cabinet full of these. Who knows, she might. 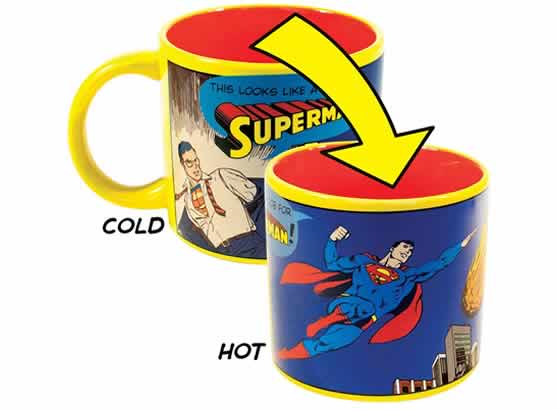 Call me crazy, but I didn’t think Batman vs. Superman was THAT bad … 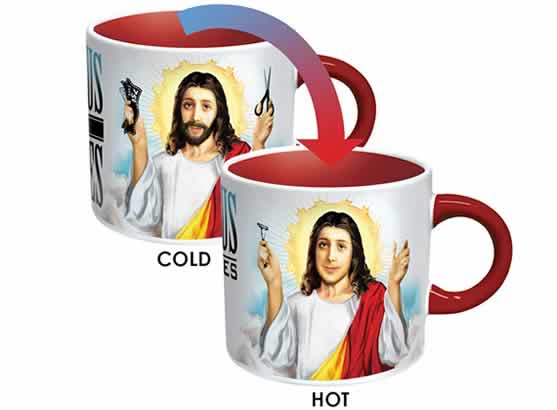 Christians, please don’t hate me for including this heat changing coffee mug. Admit it … it’s funny!

Wrap one up and give it to a man or woman of the cloth. I’m pretty sure you’ll get a nice chuckle. 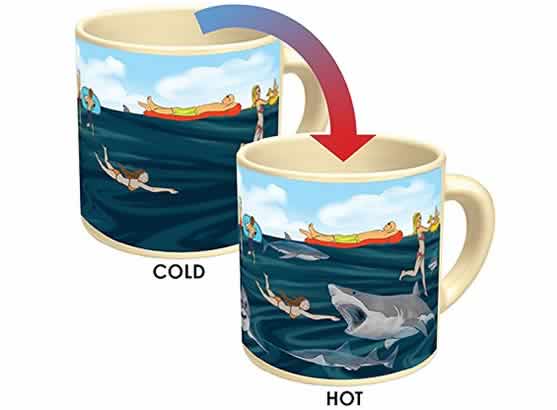 Sharks are terrifying killing machines, but they look quite at home on this whimsical heat changing coffee mug. Cute, even. 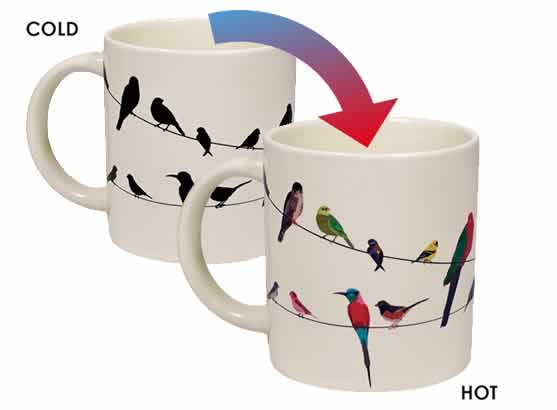 A good friend of mine is a big fan of birds. I think I’m gonna get this for her. 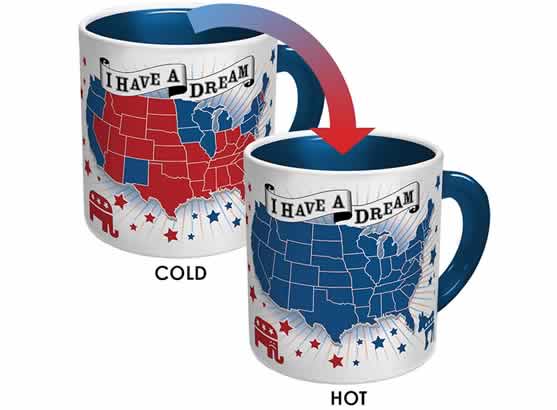 I think there should be another version of this mug that says “IN YOUR DREAMS” on it. You know, so that ideologically opposed family members can swap at Christmastime. 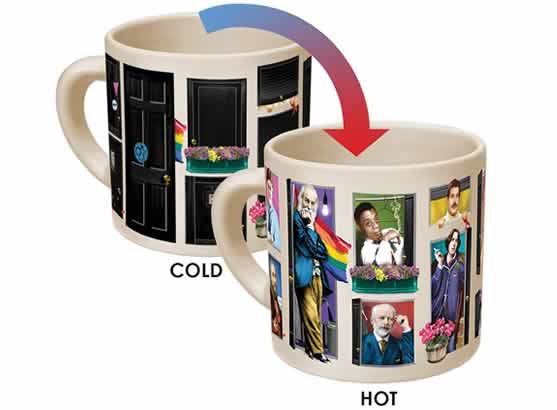 For those who are offended by this heat changing coffee mug: If a gay coffee mug is the worst thing you see on the internet today, consider yourselves incredibly lucky!

Also, please don’t yell at me for the “gays” verbiage. That’s actually what this mug is called on Amazon. 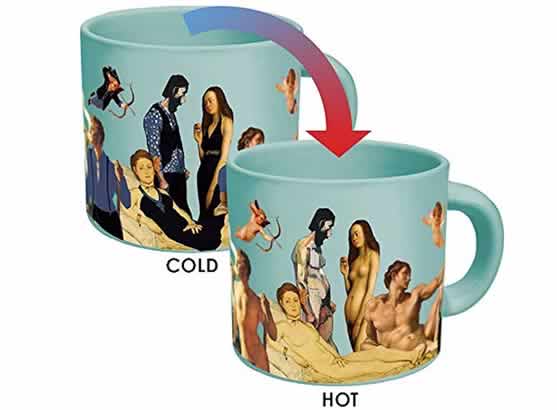 Avert your eyes! Or don’t.

Did you scroll all the way down here because I said “grownups only”? Ha. I knew that would do it.

If I could give this heat changing coffee mug an award, it would be GREATEST USE OF THERMOCHROMIC MATERIALS EVER!

(According to the Google, thermochromism is the property that causes these mugs to be heat-sensitive.)

You may have noticed that nearly all of these mugs come from the same company, The Unemployed Philosophers Guild. I don’t work for them; I just like their stuff!

There are tons of heat changing coffee mugs on Amazon that are entirely unremarkable … a shocking number of them are plain black and then reveal some random picture when hot liquid is added. Yawn.

There are even a few mugs from The Unemployed Philosophers Guild that I excluded from this list of heat changing coffee mugs. I excluded them because I thought they were just kind of lazy. Their Bob Ross mug, for example, simply changes a black background into a Bob Ross painting. I love Bob Ross as much as anyone, buuuut no. Not good enough for this collection.

I chose these mugs because, for the most part, they use the heat-change feature in clever ways. I mean, if you’re going to give a heat changing mug as a gift (or buy one for yourself!), it might as well be a neat one.